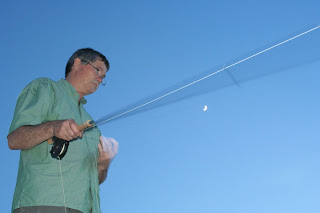 We drove to Oklahoma to visit Bruce's family last week. On the way there we stopped off and visited our mountain "cousin" Micheal Kline and his family. The mountain artists were welcoming guests that weekend for the annual TRAC tour. This event and the River District Tour in Asheville came at an opportune time since we were driving by on our way to Stillwater. We visited Kyle Carpenter at his new studio and Clayspace. We also ran into Brian McCarthy, the owner of Highwater Clays at his educational and studio facility called The Odyssey Center. We had a good time visiting and seeing what was going on with some of the NC mountain potters including Shawn Ireland, Micheal Hunt and Naomi Daglish, Terry Gess, and Cynthia Bringle. 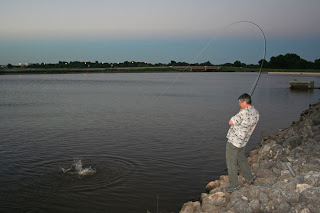 Here is Bruce bringing in a catfish at the lake
Bruce and his father got in 5 nights of fly fishing for catfish. One of the evenings was at a pond that was stocked with catfish, and the other four at a nearby lake, also with lots of nice sized catfish. Channel catfish are aggressive sight feeders, and will take a fly quite soundly. Our most successful flies were a couple of variations of "black woolly buggers". 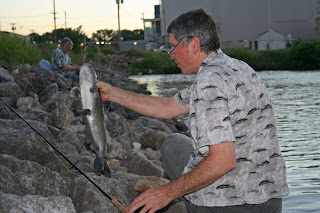 Below was the night at the pond. 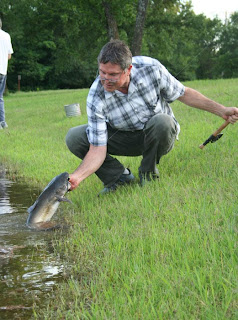 Samantha was the on sight photo journalist 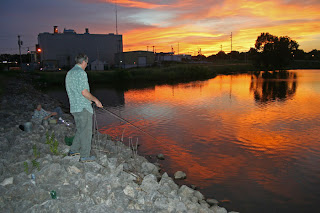 Fishing was best and most beautiful right around sunset. 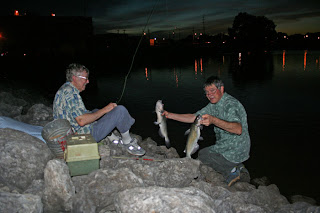 Bruce and Bob had these two on at the same time. Lipping catfish is not advised because they bite. Leave lipping to Noodlers and Okies.
I found this blog sight called Lopping Lair. You really need to check out the size of the catfish these guys caught.
Posted by Bulldog Pottery 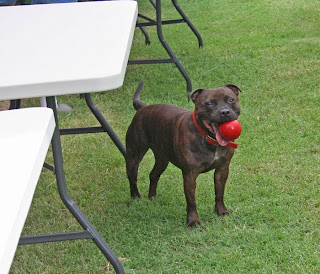 Ed and Gloria will be here in Seagrove taking care of Maxwell, shop, and the garden. Bruce and I are off to Stillwater, Oklahoma to visit family. I had plans to post pictures of the Cousins and let you know what an incredible weekend we had here. I still would like to do that and hopefully when I get back I will do this. To tell you the truth I don't know where this week went but we have been totally tired and can't even think clearly enough to do a good job of packing. We are going to take a vacation this weekend and visit our Cousin Mike out at his place and do the the Toe River Tour. Then its off to Asheville for the Studio Stroll, and to check out the Arboretum. Yesss... Our first time for these events. So please visit Gloria and Ed while we are away. I know they will enjoy seeing you. Jeffrey and Stephanie did a great post about Couins in Clay. To read about it until we get back check out Dean and Martin's Pottery blog. 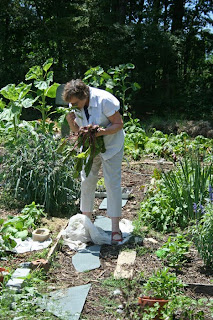 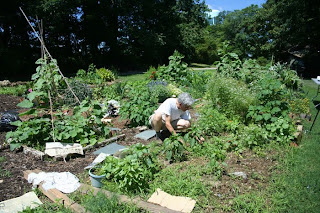 What a fantastic song. Something we should sing everyday that we are alive.
Posted by Bulldog Pottery

Links to this post
Email ThisBlogThis!Share to TwitterShare to FacebookShare to Pinterest
Labels: Cousins in Clay 2010, Dean and Martin Pottery, Oklahoma 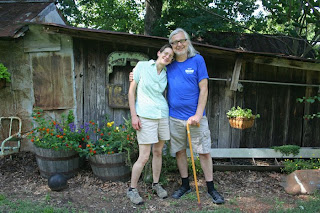 We had such a great time this past weekend. I really don't know where to start. Peter Lenzo (above) came into town for the event, and even brought some of his new work for us to see, as well as picked up a piece that Sid Luck had fired for him that was way cool. 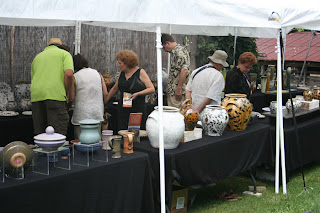 There was a constant stream of pottery loving visitors that came to peruse the selection of pots on display. 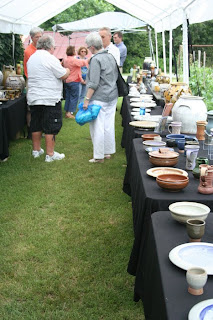 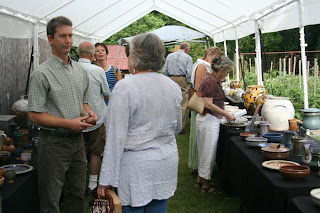 More pictures later. Check out Tom Starland's blog... Carolina Unleashed for some details of the event. I will post more soon!
Posted by Bulldog Pottery 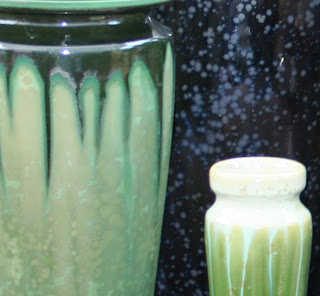 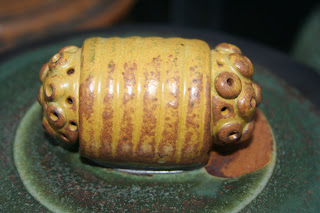 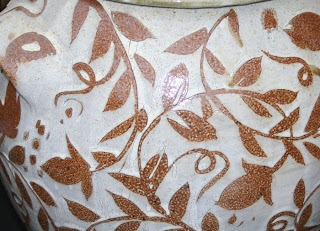 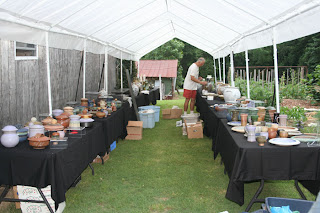 We are just about set up today. Getting ready with my coffee to head on out to finish up. Hope to see you today for this very special time with Val Cushing and Micheal Kline.
Posted by Bulldog Pottery

Surrounded by containers of yogurt 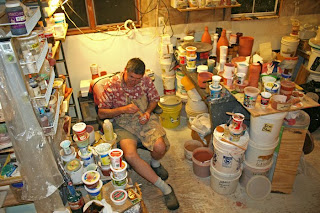 Yogurt? Not actually. We do like yogurt, but no the containers have been recycled to hold our glazes.
We are planning to glaze a few more pieces today. Then we will be setting up our tents and looking forward to this weekend with our "Cousins in Clay".
There are two other kiln openings happening here in Seagrove this weekend. Donna Craven and Chris Luther are holding special events at their places. If you are interested in researching other Seagrove Potters to visit you can do so at Discover Seagrove and Visit Seagrove websites. Also 5 miles down the street from here, Star is holding their Star Heritage Days. STARglass will be giving hot glass demos all day long on Saturday.
You can pick up information about Star Heritage Days at our place.
Wow this weekend has become quite a happening time! 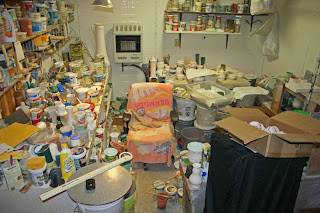