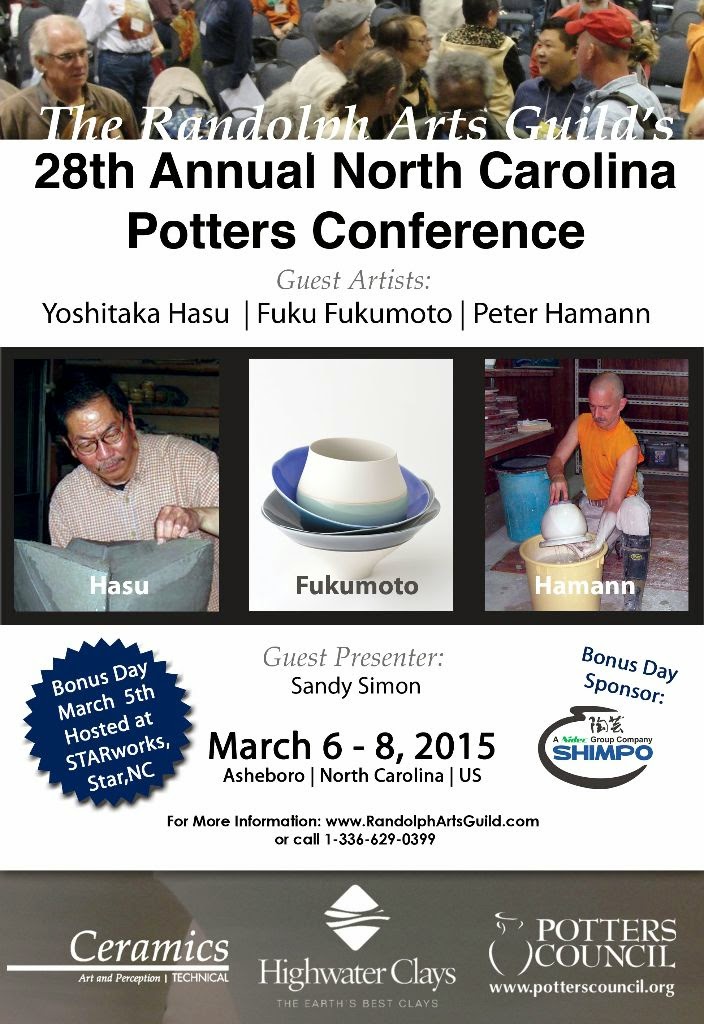 The North Carolina Potters Conference is hosted by the Randolph Arts Guild in Asheboro, NC every year during the first full weekend of March.  We have been attending the conference since we moved to Seagrove. It is three days chuck full of ideas, techniques, and comradeship. It is a really good time, and is great for all levels of clay experience.

The 28th North Carolina Potters Conference (March 6-8, 2015) registration is now open. This year the conference features artists from Japan... with a bonus day on Thursday, March 5, at STARworks in Star, NC and an exhibition at the North Carolina Pottery Center, Seagrove, NC, curated by Judith Duff.

On Friday and Saturday there are three pottery demonstrators: Yoshitaka Hasu, Fuku Fukumoto, and Peter Hamann, up on stage making work concurrently. On Friday evening after dinner there is an opening presentation (this year it will be Sandy Simon), and Sunday morning there are three 45 minute talks. Lunch and dinner meals are included and Saturday evening is a real treat getting to see Dwight Holland's incredible pottery collection.


Potters Pick - Thursday
Théodore Deck
Given the strong revival of interest in surface design for ceramics, Théodore Deck set a great precedence. A passion for researching and experimenting, Théodore Deck, was part of a group of avant-garde French ceramicists creating ceramic art at the end of the nineteenth century.

Théodore Deck knew how to turn his passion for researching ceramic materials and glazing into elegant refined objects of art. He designed and made beautiful pottery with intricate layers of lush surface effects.

Théodore Deck, worked as an independent studio potter establishing his shop in Paris in 1856, and became the director of the Sèvres Ceramics Factory in 1888. There is a wonderful selection of pottery on Google Images for Théodore Deck, where you can see a wide selection of his ceramics.

The pottery images I included on this blog where found on the following websites: The Urn, Christies, the Vase, Aspire Auctions, and the Bowl, Live Auctioneers.

Théodore Deck drew heavily from middle eastern ceramics for inspiration. On Ceramics Today you can read more about Théodore Deck in an article by Frederica Todd Harlow called "Théodore Deck and the Islamic Style".

Playing off the Instrument - Sunday
The Zoomquilt
The Zoom Quilt is a collaboration of artists from 2007, a surrealistic creation that follows along the lines of the 1977 film, "The Powers of Ten" by Charles and Ray Eame.

Hints on how to make the most of your ZoomQuilt experience: You can take the slider that is on the left and move it to the right to go forward and left to go backwards in the painting. You can also make the speed go faster, slower, or pause if you would like to look at the details. Once you set your desired speed you can hover your cursor on the right of the drawing to view the full journey.

We are intrigued by the way the men in this Portuguese clay factory manipulate the clay to construct their clay ovens.


Potters Pick - Thursday
Harrison McIntosh
When I was an undergrad at Alfred University, this bowl, made by Harrison McIntosh was on display on its own pedestal under a vitrine.  This bowl is beautiful and mysterious to me. The glaze soft, and the design a complex circle composition of inside/outside color play. I am enamored by the way the color on the inside reflected the halo color around the dots on the outside. This is a small intimate bowl, one that you can cradle in the palm of your hands.

Through the years, since my first introduction to this bowl, I have often thought of it and would see the bowl printed in a couple of Alfred's newsletters. I was reacquainted with it while touring the collections at the The Schein-Joseph International Museum of Ceramic Art this past summer when we were at Alfred. It was like being reunited with an old buddy of mine.

Born in 1914, Harrison McIntosh celebrated his 100th birthday this year with a special exhibit at the American Museum of Ceramics Art.  Watch a short interview of Harrison and his wife as they visit with some of the pots in his solo exhibition at the AMOCA museum.  Harrison McIntosh says,  "he makes work to please himself, what he finds beautiful. Every piece he made was the best that he could do."

Playing Off the Instrument
Microcosmos

The 1996 French documentary, Microcosmos, was filmed by Claude Nuridsany and Marie Perennou  covering an insect's world in a 24 hour day from dawn to dawn.  The tag-line was "Jurassic Park in your own backyard". Written in The "Wondrous Truth" of Microcosmos, by Billy Budd Vermillion, he describes this film as a "poetic" documentary.

While scanning the internet about Microcosmos we found a document of class notes called A Non-Entomologist's Guide to "Microcosmos", by Marina Caillaud and Bryan Danforth- Department of Entomology at Cornell University. This paper gives a blow by blow of the insects that appear in the documentary.

There were two promo introductions for the film to choose. I love the one showing the early morning rain storm.  There is nothing like droplets of rain hanging off an insect's exoskeleton. The other Microcosmos footage has an amazing visual of a bee buzzing through the air.


Excerpt from "How I learned to stop worrying and love "useless" art" filmed October 2013.
..... "Luke Syson was a curator of Renaissance art, of transcendent paintings of saints and solemn Italian ladies — serious art. And then he changed jobs, and inherited the Met's collection of ceramics — pretty, frilly, "useless" candlesticks and vases. He didn't like it. He didn't get it. Until one day … (Filmed at TEDxMet.)"

The two vases (vase à tête d'éléphant) were made by the Royal Sèvres Manufactory, made of porcelain in the late 1750s, and designed by the designer Jean-Claude Duplessis. These vases are in the collection of the Metropolitan Museum of Art

Potters Pick - Thursday
Karen Karnes
Born in 1925, Karen Karnes has had a very full life of making pots and engaging in the Ceramic Art World.  A long pottery career and a passion for ceramics, she has paved a path for many studio art potters. She recently celebrated her 40th year curating the The Art School at Old Church﻿ Pottery Invitational in Demarest, NJ. She established this event with Mikhail Zakin (1920-2012) a friend, fellow potter and the founder of the Art School at Old Church, Demarest, New Jersey in 1974.

Mark Shapiro edited "The Chosen Path" a book about Karen Karnes that includes an introduction by Mark Shapiro, a foreword by Garth Clark, and narratives by Christopher Benfy, Jody Clowes, Janet Koplos, Edward Lebow, and Karen Karens. Mark also conducted an oral interview with Karen Karnes for the Smithsonian Archives of American Art.

Beginning in 1997 there was a film produced about Karen Karnes by Lucy Pheonix. This documentary of Karen Karnes is called "Don't Know, We'll See".

The Salt Glazed Covered Jar, made by Karen Karnes in 1969 is in the collection of AMOCA (Gift of James W. and Jackie Voell), The American Museum of Ceramic Art, located in Pomana, California.


Playing off the Instrument - Sunday
18 Mind-Blowing Images From The World Of Science
The photo above is by Stefan Eberhard, an image of an Arabidopsis thaliana flower, commonly known as thale cress.

Excerpt from Fast Company blog titled Fast Co.Design....
"The annual award celebrates the intersection of science and art, reminding us that the best visual inspiration often comes from the shocking beauty of the natural world."

...."The images will be added to Wellcome's vast collection of more than 40,000 science images, culled from researchers, clinical photographers, and illustrators, which are available freely to the public. "

The Wellcome Images is one of the world's richest and most unique collections, with themes ranging from medical and social history to contemporary healthcare and biomedical science.

You can see and read about the 18 award winning images at the Wellcome Images Award 2014.

Below is an image by Spike Williams of a Lagena, a class of marine protists with an external shell, made using ‘Spikeberg’ illumination, a combination of polarised light and Rheinberg illumination pioneered by the photographer, and captured on a Canon EOS 5D Mark II camera.

We are here to debunk a Seagrove Pottery myth. The myth is that the Seagrove Potters are sold out after the "Celebration of Seagrove Potters", and no longer have pottery left to sell in their shops. There are many of us that continue to be hard at work, making more pots in our studios. A large group of potters have "One more Hurrah" and hold special Holiday Kiln Openings in December.

Below are some of the potters that are busy and hustling in their studios to make more pottery to fill the shelves of their pottery shops for this season.

This weekend on December 13, 2014 around 15 Seagrove Potteries will have special kiln openings.

Here are the Seagrove Potteries that we are aware of having a holiday kiln opening this weekend.  And without a doubt if you don't see a pottery that you know listed below stop by there shop. We are sure they will be glad to see you.

This is the Front and Back of the recent Holiday Kiln Opening Postcard we mailed across the United States.

Have you ever wondered what periodicals potters read?  The Studio Potter magazine is one of those 'must subscribe to' magazines for us.  Focused on aesthetic philosophy and the working potter with an "essential belief in functional pottery," The Studio Potter﻿ began in 1972 and is published twice a year. The articles are written by potters, sculptors, curators, and clay enthusiasts.  A theme is proposed and a deadline set for articles submitted to the publisher.

We have collected just about all of the The Studio Potter journals. We are missing a couple of them including the first Studio Potter that was published.  When you become a member you also get the chance to select one back issue.

Potters Pick - Thursday
John Gill
John Gill is a superb teacher and ceramics artist with a gift for transmitting the unconventional possibilities of ceramics and form. John's generous sharing of his unique visions for the potentiality of clay creates a contagious enthusiasm for anyone brave enough to be open to what he can convey.

We had a wonderful time this past July, when we took a summer school class with John Gill at Alfred University. If you want to recharge your creative batteries for ceramics, it would be hard to do better than attending one of Alfred University's "Summer Ceramic Art" classes.

Located in Richmond, Virginia, The Lora Robins Gallery is a museum that bridges the arts and natural sciences. This museum is chuck-full of fossils, shells, minerals, and all kinds of interesting artifacts. It also has ceramics! We were in heaven when we visited the large room filled with curiosities.

You can visit the museum on the campus of the University of Richmond. It has in its collections 100,000 pieces ranging from Jurassic dinosaur fossils, minerals, prehistoric shells, fluorescent rocks, and Chinese ceramics. One of the objects that we fell in love with was a fish fossil which was discovered in Kansas. The Xiphactinus is the largest bony fish in the Western Seaway reaching as much as 17 feet in length. Wow!