This coming weekend is the 25th Annual North Carolina Potters Conference at the Moring Arts Guild in Asheboro, NC. This year's conference has a different twist.
The following three premier potters were invited to share their techniques and wisdom.
Cynthia Bringle - North Carolina
John Glick - Michigan
Jack Troy -  Pennsylvania
These three potters were given the opportunity to invite a young potter that they felt noteworthy, to demonstrate as well.
Cynthia invited Ronan Peterson from North Carolina
John Glick invited Martha Grover from Montana
Jack Troy invited Jake Johnson from Pennsylvania
So that is 6 different views and pottery techniques, We are psyched!
There is also an awesome line-up of speakers!
Louise Cort, curator of the Ceramics collection at the Freer in Washington D.C.
Walter Ostrom, a major educator in contemporary ceramics, and retired professor from the Nova Scotia College of Art and Design in Canada.
Bob Armfield a local potter from Ramseur, NC who worked with Walter and Dot Auman.
Mark Hewitt from Pittsboro, NC who was featured in the PBS series Craft in America series.
The images that are shown here are pieces by the invited pottery demonstrators. These pieces will be on view at the Moring Arts Guild throughout this week and during the weekend. 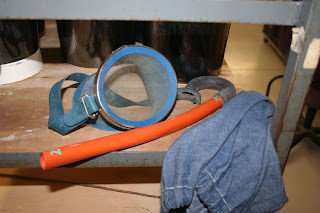 As I was looking around the studio today. Saw something new on one of our ware carts. Where did Bruce unearth this from today and what is he planning?
I am loading up some of our our favorite tunes on my itouch. Our cd players have given out and we miss our music.   After a couple of years of podcast stories it is time to introduce music back into our studio life.  Where does the time go? 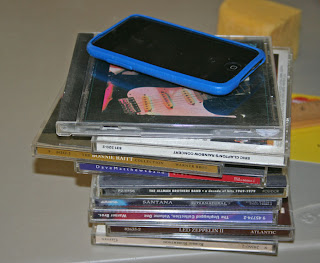 Below are two examples of leaf cups with handles that I have been working on.  These particular ones are going to be glazed with some of our transparent colors. I am thinking about making a series with our Moka glaze too. 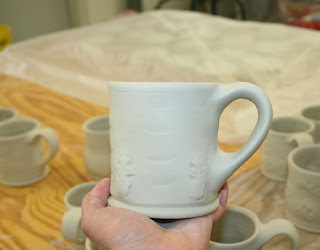 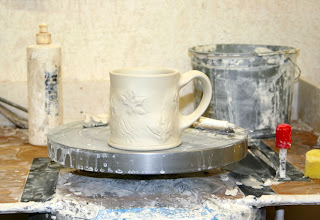 Walter Ostrom is a retired ceramics professor from Canada. My memories of Walter Ostrom at the conference is of his excellent talks about pots and aesthetics. Pure love for the craft comes across when he speaks about ceramics. One of many reasons we are looking forward to the upcoming NC Potters Conference in March is because Walter Ostrom will be back in Asheboro on Sunday (March 4) for a morning presentation.  On the right is a hand built vessel by Jim Robinson, who is now working for Rookwood Pottery as their glaze expert in Cincinnati, Ohio.  Jim is well known to many potters because of his excellent article on shino glazes in the "Studio Potter" magazine as well as other clay and glaze articles.

Below is a close-up of Walter Ostrom's plate. I remember during his demonstration he spoke about his garden. You can see his influence in his flower patterns below. 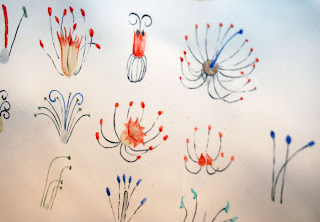 The two soup tureens below are by Gail Kendall and Lisa Orr. Gail Kendall's ceramic work is on the left, she has recently retired from the University of Nebraska.  On the right is a soup tureen by Texan potter Lisa Orr.  But hey you don't have to put soup in these. You can put anything you want, you could serve jello out of these dishes, wouldn't that be fun!

Below is a close-up of Gail Kendall's oval covered jar lid that is adorned with a myriad of color and pattern. Every way you look at this piece whether from top down or bottom up, there is something exciting to see. 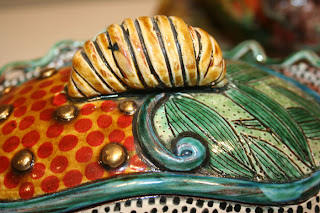 Lisa Orr's covered jar looks like it is glistening wet with rich color and texture. The gestures and movement in the handles and surface look alive. 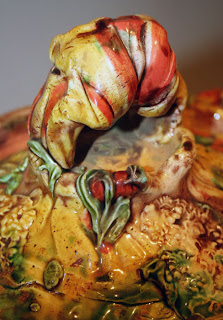 John Leach is from the United Kingdom and was a presenter at the 4th Potters Conference. This was before our time. Derrick Sides the director of the Randolph Arts Guild showed us a picture of John Leach and Dorothy Auman together. I believe this was one of the early conferences that was held in the upstairs room at the Art Guild.  We couldn't imagine more then 40 people could fit in that room. Now the conference has grown to a 150 sold out audience.
Mary Law is a potter from California. Gloria and I attended this conference. She was quietly throwing while Jane Hamlyn told us stories about her home in Great Britain and Robin Best from Australia busily worked on making her model, mold, and casting slip.  Mary Law threw a tea bowl and took a very soft rubber rib and went inside the thrown cup and pushed out with the rib. It was beautiful. Now I like to do that to my cups, very nice effect.

Attending these conferences can be pretty intense. There are three well versed and talented potters up on stage, and I want to watch all of them at the same time. But you know that is just not possible. So the only thing you can do is keep going from one potter to the next, then back and forth, trying to take in as much as possible.

Below is a close-up up Canadian potter Bruce Cochrane's handle of the above jar. He spoke of being inspired by Chinese Bronzes. His hand building demo was out of this world. The above three, Lorna from Colorado, Sarah from Montana, and Bruce from Canada all were on stage together. All three of us were able to attend this conference together. Front Row! It was a lot of fun to watch these potters work and be able to talk together about it at home in our studio. 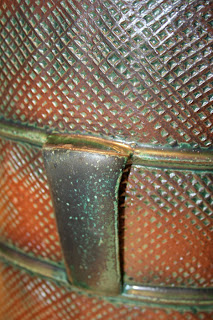 You can find out details about the upcoming North Carolina Potters Conference in Asheboro on March 2-4, at the Randolph County Arts Guild website.
Posted by Bulldog Pottery


This exhibition is up right now at the Randolph County Arts Guild in North Carolina, Feb.1 - Feb. 29, 2012. We went to see it this morning, taking the break to see it was our Valentines Day gift to each other. There are some really nice pots on display.  Pottery by Josh Deweese, Andrea Gill, Val Cushing, John Glick, Cynthia Bringle, Lisa Orr, Mark Pharis, Mary Barringer, and many more. So you say you want a closer look?  Well check back in, we will post some closer views later in the week.
Posted by Bulldog Pottery

The Tempo Picks Up


We are filling our work tables with vases. Daffodils are in strong bloom, a bit early this year.  Daffie Days is around the corner on March 30- April 1 and after glazing the vases, we plan a kiln load of Moka and shino glazed pottery for the Celebration of Spring with the Seagrove Potters on April 21&22, and we also have a show coming up at the PAF Gallery in Siler City beginning March 16-April 13.  Upcoming shows and deadlines have pulled us out of our January hibernation of organizing, creative thinking, cleaning up, projects, reading, researching, writing, and a myriad of other activities that can fill our day.  The life as a self-employed artist is full of crescendos, with sometimes at certain points in the composition, we hold the volume up at top level for a length of time. That tempo can make even the most fit person breathe heavily. We need to allow ourselves some organic uncontrolled time, and we did this past January and it sure felt good.  I was reading a book and it mentioned that to keep up artistic motivation and creative thinking one must be healthy, eat well, and get plenty of sleep.  Sometimes the plenty of sleep is just not possible, and eating must be pared down to quick simple meals.  Life as a professional artist is an ongoing arrangement of making time to get the work done and balancing that with a healthy life style.
Posted by Bulldog Pottery

The Vase
Both Bruce and I have focused many hours at the wheel in our studio, designing different variations of the vase.  There are numerous approaches and there is an incredible historic precedence in the exploration of the vase as form.  We find it a traditional pottery form that we always enjoy getting back to and reinterpreting.  Bruce and I will sometimes play back and forth in the studio when working out different curves and nuances. One of us will start a rhythm and the other will feed off it, and work out the silhouette in their own way.  We also have certain variations of the vase that we seem to be drawn to individually.  Whether it is tall and slender like my vase above or round and gourd like, the vase form provides an excellent shape for us to explore glazes and surface development.


I am honored to be awarded a Honorable Mention by juror John Glick for the Vasefinder Internationals 2012.  This online vase show is hosted by Charles Blim of Vasefinder. Vasefinder is a membership based website whose advocacy is for the ceramic artist and the pottery profession.

To see all of the exhibitors in this show check out Vasefinder Nationals 2012.
Posted by Bulldog Pottery