The Sun Came Out Today 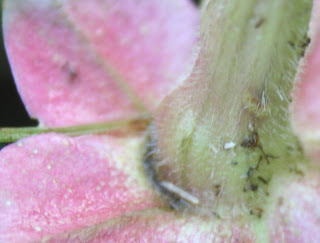 It was very pretty outside today. It is so nice to have the sun come out after the grey days we have been experiencing. Though I was very happy yesterday that the grey was mixed with rain. We sure do it need it. Our ponds are lower then ever. We saw a good movie the other night called Gran Torino staring Clint Eastwood. It is one of those movies that sticks with you the day after, I felt it represented the ultimate sacrifice.
This image is of one of the last nicotiana flowers in our garden. 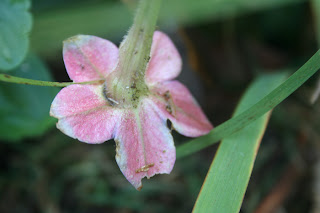 On the Studio Table 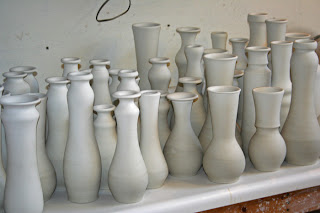 We are filling out tables with pots. It has been a busy month for us and it sure feels good to see some shapes coming off of the wheel and onto the table. I have finished this group of porcelain vases and cups and plan on glazing them with our crystalline glazes. Now our focus is on our Moka glaze pottery. I am starting with the forms that take attachments so they can dry slowly. 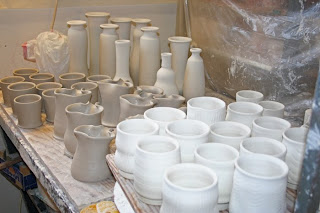 Maxwell, Bruce, and the Red Ball 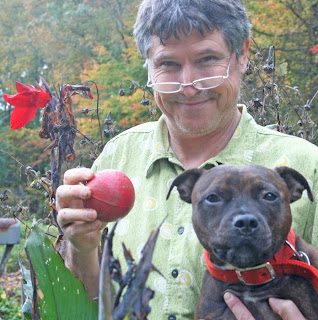 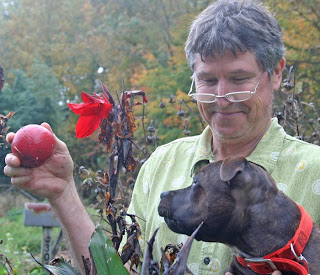 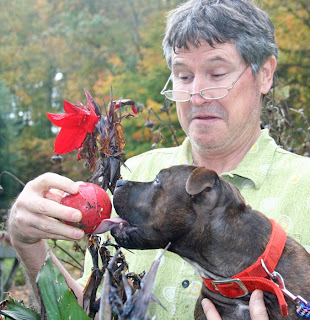 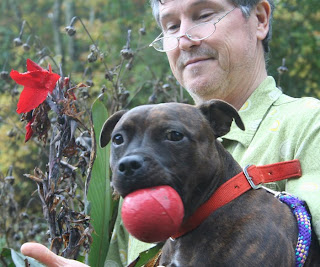 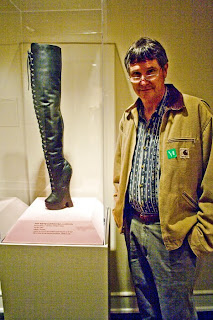 Yesterday we visited the Mint Museum of Art. Our last day out before studio lock down. We need to throw, throw, throw.... We arrived there at 10:00am to listen to a lecture about Rockingham Pottery. This also allowed us a chance to peruse the Mint and see some of the exhibitions that they have on display. There is a Platform Shoe exhibition. Check it out. I had to lighten the images so they are a bit grainy. No flash is allowed in the museum. 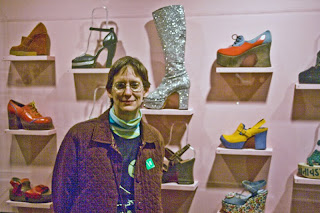 Links to this post
Email ThisBlogThis!Share to TwitterShare to FacebookShare to Pinterest
Labels: Mint Museum of Art

Playing with Pictures: The Art of Victorian Photocollage 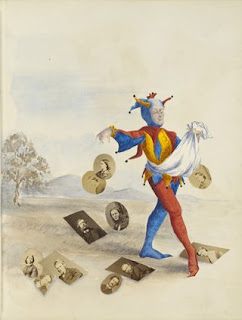 We thought that we would share with you a blog that we like to visit periodically.
We have been visiting it ever since they posted about a pitcher show in Asheville sometime ago. The blog is called Curated Object : International Decorative Arts Exhibition and Curiosities. They recently have posted images from a exhibition that is on display at the Art Institue of Chicago called "Playing with Pictures: The Art of Victorian Photocollage".
We collect a variety of books. Through the years of collecting books, there are certain images that reoccur due to our focus on themes and subjects that are of interest and images that for some reason or another resonate with us. The two images that I have selected from this exhibition shows an example of this. The jester and butterfly. 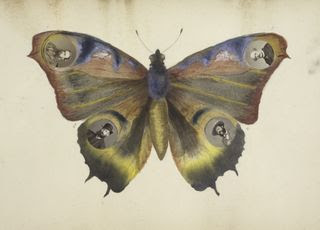 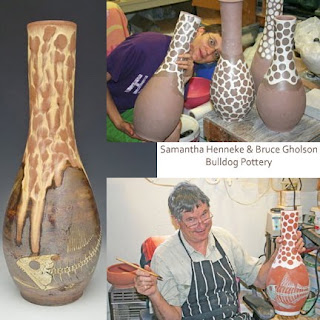 Jennie Keatts put this montage together from images we sent her.
Go to Celebration website to see a few more.
We finished our collaborative for the Celebration's Gala Auction at the Historic Lucks Cannery. The Friday night (Nov. 20) Gala begins at 6:00 pm and ends around 9:00 ish. Tickets are $35.00 which includes food and beverage, early pottery sales, music, and entrance into the Sat. (Nov.21) and Sun. (Nov. 22). Seagrove Celebration as well. You can buy tickets online at the Celebration's website. We are also selling tickets here at Bulldog, which can be purchased by mail or in our shop with a check. Several of the Seagrove Potters get together to make special collaborative clay pieces which will be auctioned at Friday evening's Gala event. Last years Gala was a fun filled resounding success, and there is an excitement about attending this years event. To see images from last years Gala check out our blogpost.
Posted by Bulldog Pottery

Links to this post
Email ThisBlogThis!Share to TwitterShare to FacebookShare to Pinterest
Labels: Celebration of Seagrove Potters 2009

We have signed up for the Word of the Day to come to our e-mail. We wanted to share this one with you.

Word of the Day

Fear or a phobia concerning the number 13.

Despite NASA's seemingly ingrained case of triskaidekaphobia, which forced managers to impose the bizarre, '13-free' numbering system on its flights, the crew of perhaps the most important Shuttle mission to date clearly were unsure if STS-41C was supposed to be unlucky or not. 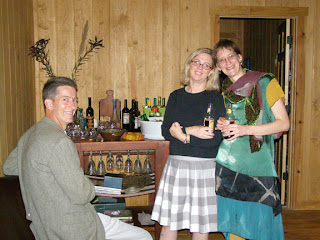 To see more images of the Wednesday night fundraiser for the NC Pottery Center that we had in Seagrove, go to Jennie's JLK Jewelry blog.
Jennie sent me this picture she took of me with David and Nancy. David is a potter and neighbor, and Nancy is the director of Central Park NC. I am wearing a wonderful hand made skirt, top, and scarf that I acquired last year at the Carolina Designer Craftsman Show. Jen Swearington from Asheville made it. Meredith reported that we raised $1500 dollars for the North Carolina Pottery Center Wednesday night during the Craft in America viewing at Jennie's, but Meredith of Whynot Pottery will give a final amount when she gets back from the Crozet Art Fair.

The 1/2 hour before the PBS Craft in America special began there was a re-showing of the interview with Nancy and the STARworks staff, as well as, Kenneth from Comfort South and Eddie from WetDog Glass. Back to back with the Central Park Program was an interview with Vernon, Pam and Travis Owens of Jugtown Pottery. The STARworks blog provides you with two different links to see the video that UNC TV did on Central Park NC.


ON ANOTHER NOTE: Central Park NC is having their annual open house on October 29 at Starworks in Star, NC. This event is open to the public, but an RSVP is needed. The keynote speaker is Michael Schuman, there will also be a workshop on Saturday. To find all of the details for signing up for the workshop and the meeting, go to their website here. Last years open house was a lot of fun. The STARWorks Glass folk gave demos, informational presentations were given, good food, and there was a jazz band. Lots of happy people to talk too. Come out to hear about what Central Park NC is all about!! We received an e-mail from Pam Owens this morning. A gentler reminder:
Greetings Friends of Craft in America and Jugtown Pottery,
Included in this program:
Vernon Owens, master potter - Jugtown Pottery, Seagrove, North Carolina. Vernon, a sixth generation potter,has been making pots at Jugtown for over 50 years, having started making pots for sale at the age of ten.
His story – and that of one of America’s oldest potteries – continues with Pam Owens, Vernon’s wife; son Travis, age 24, and daughter Bayle, age 19, all of whom work at Jugtown and continue the family tradition. We also hear from potter and former owner of Jugtown Pottery, Nancy Sweezy, and potter Mark Hewitt.
Posted by Bulldog Pottery