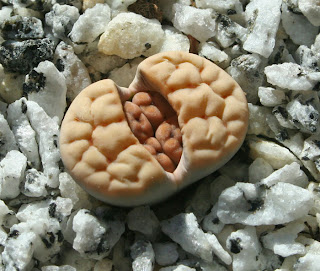 A couple of years I purchased a pot full of these interesting plants and separated them into their own individual pot.  I am going to guess at the time that they were probably 3-4 years old. I have owned a few in the past, but managed to over water them. When lithops are over watered they explode.  Not a pretty sight.  We are going into our second winter living with these plants. I think they have grown a little. I have lost a few but I have managed to keep just about all of them alive. Back in November around Thanksgiving time around 8 lithops bloomed. I have read that watering should cease in the winter.  During this past month the lithops' leaves split open to reveal new leaves inside. Sometimes they split open and remain one new plant, and other plants split open, becoming two new plants.  Very Cool.  This is the time to definitely not water because the inside leaves are now getting water from the outside leaves of the plant, so if I were to water them now they would take in the water from the roots instead of taking in water from the outside leaf and the outcome would be... well lets not go there. We just won't water them. 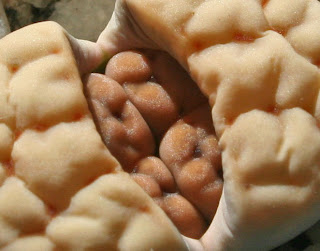 I like to separate out the plants that are splitting, this way I can keep an eye on all of the action. 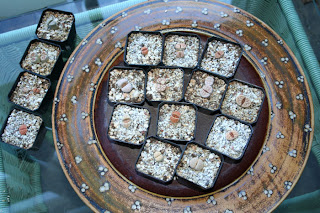 Last year this lithops plant was three leaves and each one split into 2, making 6. I have been watching this one closely to see if it will split again. I was thrilled a couple of days ago when I saw a couple of them are beginning to open up and I am waiting with anticipation to see if the will become 12. How exciting. We are not sure if they will multiply this story to be continued.

The lithops plant is native to South Africa and is also called living stones. I have read that by looking like stones on the desert floor, it helps to camouflage them from hungry animals. 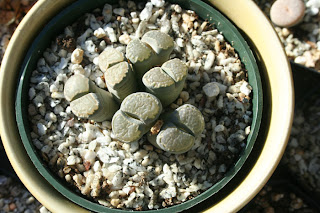 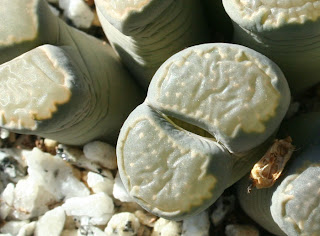 Email ThisBlogThis!Share to TwitterShare to FacebookShare to Pinterest
Labels: lithops

What fun & strange little plants! Kudos to you for being able to keep something so tricky alive...must mean you have a very green thumb!

how very interesting.
I am sure I looked at these one time when I was over- they are really amazing- and I like the fact they can be neglected but in doing so give you even more life.

Way cool, I thought this was about lithium opportunities. I love lithium, that low coefficient of expansion fits my style. I see now - it's a plant! I didn't know the name. I got a cluster of lithops ten years ago, planted it, and in a week the deer ate it. Maybe it has a nutritional profile that entices the deer. I bought it at Pan's Garden in Carpinteria, CA.

I love these plants too! I saw some of these at at the Buffalo Botanical Gardens but didn't know what they were called. I always thought the surfaces would be awesome to replicate as a glaze ;) Thanks for the pictures - now I know what they are! (and I will someday get some!)