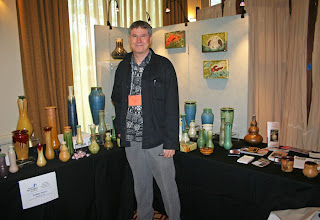 We were set up in a large conversation room with four other contemporary potters, around 5 antique displays and an awesome display of Weller Garden figurines (new to us). The rest of the antique art pottery dealers were displaying right on the other side of wall inside the ballroom. Bruce and I spent as much time looking at the antique pots as we could, but on Sunday we were both agreeing that we really needed another day to take in all that was there. The selection was amazing and the pottery very inspiring. We will be posting images of some of the wonderful pottery that we saw. But first things first!
There were four other contemporary potteries displaying their artwork. We were set up between Mary Pratt and Eric Olson. Beside Eric was Chris Powell and then beside Chris was Paul Katrich. 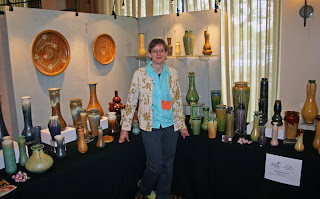 Mary Pratt is a potter living in Wisconsin. Her work is hand-thrown and hand-sculpted Art Pottery with a nature theme. She is inspired by her surroundings and loves botanical drawings and scientific depictions of insects. You can learn about her at Pratt Clay Studio.

Mary Pratt with her display of porcelain pots 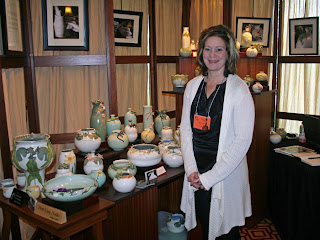 This is a detail of one of Mary's finely sculpted frogs 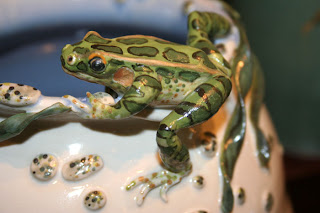 Eric Olson is living in Florida now, and on a boat! Eric took some time off from his pottery studio work and sailed around in his boat. He loved it so much that he moved to Florida and has made the boat his home. He rents a studio space and makes his work there as Common Ground Pottery. His companion Lucy, a black skipper dog, came with him and quietly slept behind his booth during the two days. His work is intricately decorated with various nature motifs.
Below is Eric with some of his work. 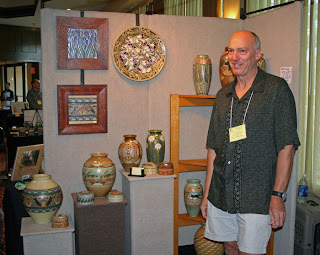 A close up of several of his intricately decorated pieces. 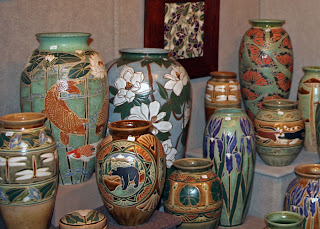 Paul Katrich is a potter living in New York. He focuses his creative artistic energies on creating luster glazes. His website is full of information about him including you tube videos, magazine articles, and interviews. He generously donated one of his larger vases to the AAPA live auction that went for 1700 dollars.
Paul Katrich and lustre glazed pieces. (photo by Mary Pratt) 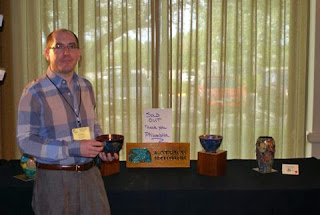 On the left is Chris Powell a potter from Ohio. He shared a booth with Dod Stewart who drove up from Mississippi with his collection of Shearwater Pottery. Chris Powell has been working on perfecting his aventurine glaze. From his website Chris Powell writes "After 25 years of working in clay, I am still attracted to strong simple forms with beautiful surfaces and incorporate this passion in my work. From throwing to decoration to glaze work, I strive for excellent craftsmanship that unites form, design, and surface." 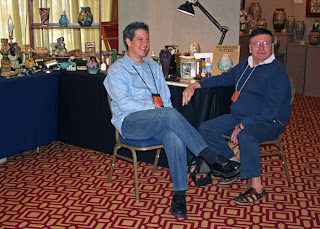 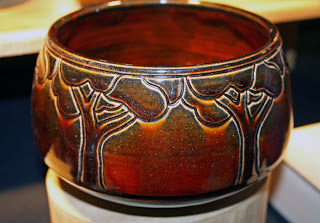 The American Art Pottery period is an inspiration for all of us potters that displayed at the Art Pottery Show and Sale. The potters drove from Wisconsin, Florida, Ohio, New York and North Carolina and all met here in Langhorne, PA. to take part in this event. Pretty cool.