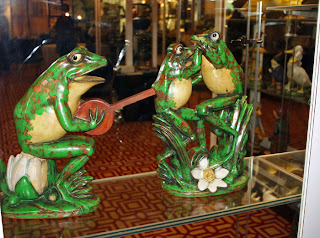 We had fun looking and getting to know these Weller Garden Figurines. We were told that because of breakage when shipping the only place that you could buy these was from the Weller Pottery showroom. They were mainly displayed in people's yards and because of this fact they are rare today, primarily due to their breakage from lawn mowing, children playing ball, and all of those great things that people do in their yards! These works were displayed near our booth and we walked past them frequently during the AAPA conference.
Weller Pottery was founded in 1872 in Fultonham, Ohio and later moved to Zanesville, Ohio. Our focused knowledge of Weller Pottery is of the luster pottery called Sicardo, named after Jacques Sicard, the glaze chemist and artist who worked for Weller Pottery during the early 1900's. Sicard brought his technology and skill from France after working for Clement Massier, and the Sicard Weller pieces have a strong similarity to the Massier lustre pottery.
Check out Jason Jacques Gallery for images and info about Clement Massier and other European Art Pottery. Awesome resource.
Weller Pottery made many lines of glazed pottery from the the beginning of 1872-1945. There was an Wisconsin Pottery Association Weller Pottery Show back in 2001, they have a list of various lines of pottery that Weller produced and an article about Weller Pottery. There are books that you can read about Weller. Here is a list of them at Just Art Pottery.
This frog is a sprinkler. Notice the propeller on his head and the attachment coming out of his back end. Pretty cool. I want one! 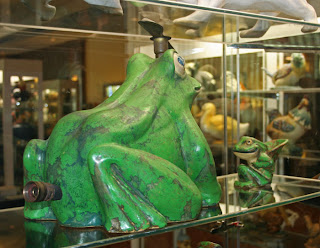 I want one of these too. 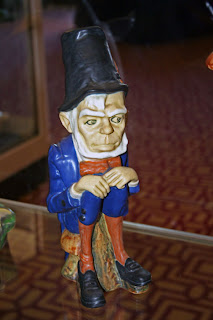 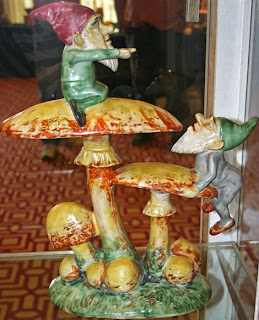 The cat is a roof tile or top of a garden wall ornament. 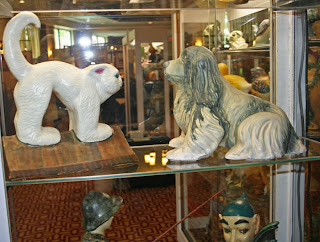 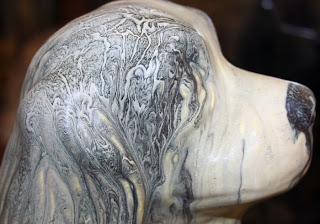 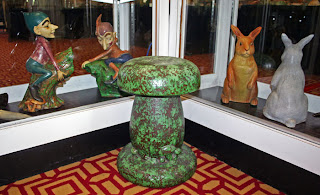 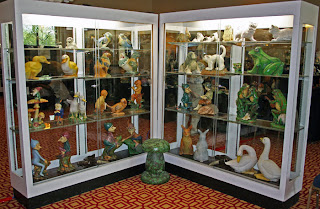 I love the frog sprinkler. That's crazy. Thanks for sharing.

those are the best garden gnomes i have ever seen!

I love what I have seen and am so pleased to find there are other nutters like myself that enjoy FROGS.
VANDA